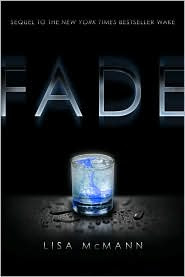 Janie has now taken on part-time work for the police, working undercover with her Cabel. Their mission is to track down a teacher who is sexually preying upon students at the high school. What this all has to do with Janie's ability to experience other people's dreams is a bit unclear, but it does plunge her into some apparent danger. There are also some visits from the Beyond by the late Miss Stubin to keep things interesting.

I really liked the concept of Wake but complained that it suffered a bit from clunky writing and a weird ending. Unfortunately, this book picks up in the midst of the weird stuff and stays there. And the writing doesn't improve. McMann attempts to write the entire book in present tense, which is very challenging to keep up and to make readable. She does succeed.

She also continues to try to simulate dreams with short micro sentences.

It's enough to drive you completely nuts or make you want to scream or just close the book.

In two words: it stinks. And it isn't writing.

In addition to being poorly written, this book suffers from a nonsensical plot, a lack of suspense, a romance without even a flicker of heat, and some of the most inane dialog ever put in a published YA book. I think it is safe to say that I despised it.
Posted by Paul at 9:19 PM