Jumping Off Swings, by Jo Knowles 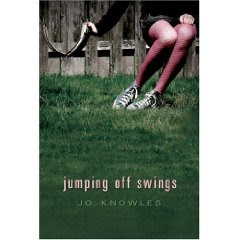 Teen pregnancy is one of those subjects that's been done quite a bit in YA and so it really wouldn't seem that there would be much new that could be done with it. The story itself is predictable and always follows the same basic pattern (girl has sex, girl misses period, girl can't believe this is happening, tears, crying, etc.). However, never get so jaded in the reading business that you underestimate the ability of a writer to totally surprise you.

Told in the alternating voices of Ellie (the pregnant girl), Josh (the guy), Corinne (Ellie's best friend) and Caleb (Josh's friend, previous admirer of Ellie, and blossoming lover of Corinne), we have a typical writer's challenge: how do you fit enough character-building narrative into 230 pages to effectively develop not just one teen, but four? Much to my astonishment, it actually works. Ellie gets to play the typical regretful and fretful expectant mother, but she's far from sympathetic. Instead, she make a series of errors along the way that have you wringing your hands, but you can't help but understand why it is happening (her distant mother, on the other hand, you will completely want to throttle, but even that minor side character is understandable). Corinne and Caleb have the interesting role to play as the shining example of what love should be all about. But of the four main characters, Josh was the one that caught my interest the most.

I've read some BLOGs claim that Josh's struggles with his feelings seems unrealistic, but I'd rack their inability to accept that boys have deep feelings as well up to the reviewers' age (young) and sex (female). (Hey! for all the years of abuse I've taken for being an old guy and not understanding teen girls, I think I'm entitled to my dig here!) If you ever have been in Josh's shoes (and yes, I have actually been in his position) then you totally know how hard it is to be the guy in this situation. Josh's balance of anger, frustration, and grief was utterly on the mark. And Knowles gives it just the right amount of balance -- neither playing him up as a saint nor claiming any greater rights than he gets (he's never portrayed as the victim). I'd have been pleased enough that Knowles wanted him to be something more than a sperm donor, but she goes much farther towards trying to explain him.

Ellie is the one who pays the greatest price, of course, but her story is less interesting because it is so well known. The strength of this novel is that Knowles wants to show how the pregnancy affects all four of the characters. It's a more nuanced read of the events. It doesn't change one thing about the facts portrayed or the shock you will feel, but it fills out the story.
Posted by Paul at 7:45 PM