The Princess and the Hound, by Mette Ivie Harrison 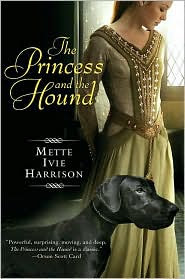 Prince George may be heir to the throne, but he bears a terrible secret: he possesses "animal magic" which allows him to communicate with the animals. This is such an evil thing that anyone found to have such powers is usually burned alive. And so it must remain a secret. Princess Beatrice is shy and private, preferring the company of her loyal hound Marit over the company of any human. And she too bears secrets that may be even more horrible than George's magic. When their fathers ordain that the two should be married, their match seems unfathomable. But George and Beatrice are both dutiful and will obey the will of the kings.

A strikingly beautifully written fairy tale, told in an unusually fairy-tale like voice (avoiding the typical first-person action novel approach used in most fantasy). Harrison's PhD in Germanic Lit is put to good use as this story, while bearing no resemblance to any one legend, bears the style of the best of them -- part Brothers Grimm, part Parsifal. You can read the story literally and enjoy it heartily, but there are numerous additional layers to entertain you: from the "magic" that dare not speak its name to the struggle that Beatrice and Marit have to define their identity to the troubled relationship that both of the children have with their parents. There is an awful lot here to be explored.

Some of the most memorable scenes in the story creep up on you unexpected (the confrontation between Marit and the pack of wild dogs, the duel in the Game of Kings, Lord Peter daring George to plunge into the moat). Others are much longer to develop and grow with the dramatic arc (the bear, the demise of the kings, George's coming of age). What is so marvelous is that they all flow so well together.

The funny thing is that the "animal magic" stuff, so central to the story, is the part that worked least well for me. Perhaps because it is always being suppressed and concealed, it seems underdeveloped, even non-essential for the story. Its purpose (for me anyway) seemed more to illustrate a nice symmetry between human and animal world that makes this story stand out.

And yes, I will turn to the sequel in a few weeks. Stay tuned!
Posted by Paul at 8:35 PM