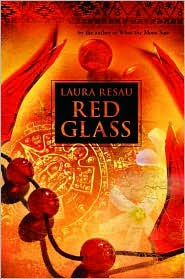 Growing up with her Mom and Stepfather in Tucson, Sophie has been exposed fairly often to migrant workers and while friendly to them she has stayed largely detached. When a young boy comes to live with them (after his parents are killed while crossing the border), Sophie abandons her usual fears and opens up to him, dubbing him her Principito (little prince) after the title character of her favorite book. And when the family discovers the little boys living relatives in southern Mexico, Sophie agrees to accompany the boy on the trip back. Going with her are her eccentric aunt Dika (a Bosnian refugee), Dika's boyfriend Mr. Lorenzo, and Lorenzo's son Angel. For Sophie, who's been afraid of nearly everything around her, it is the trip of a lifetime, exposing her to strange and scary new worlds.

A beautifully written journey through Central America. The multicultural flavor of the book (Bosnians, indigenous Mexican, and Guatemala) will appeal to the folks who worry about such stuff, but like the very best books that straddle multiple cultures, none of it really matters in the end. Instead, Resau has written a book about human beings, showing how we are all creatures of circumstance. Sophie's transformation from "weakling" to fuerto is as wonderful as it is expected, but she don't neglect the others. Almost every character in the story undergoes some sort of transformation, which draws us to them (even to the bad guys).

There's a fair amount of adventure and action in here to keep restless readers occupied, but more than anything else there is good dramatic payoff in the end that makes you feel like you have been more than entertained.
Posted by Paul at 11:46 AM

I read this book a couple of years back for the Cybils (my review), but what really got me excited was the Tucson setting. At the time, I was living in California and missed Tucson something fierce. I love books that take place somewhere unusual and do it well.

It's funny, because my initial response was that Tucson isn't that unusual of a setting, but then I couldn't come up with any other examples, so I think you're right. I certainly found the book's treatment of all of its locales interesting and exciting.