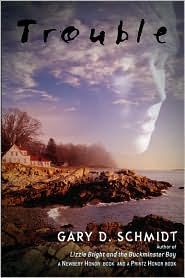 Trouble is the one thing that Henry has always figured would pass him by in his safe blue-blood family and the idyllic sea-side ancestral abode where they live. But when Henry's brother is struck by a truck and lands in the hospital, Henry's world seems full of trouble.

Things get complicated. The young Cambodian boy Chay who is accused of driving the truck that caused the accident becomes the focal point of racial tensions in the community. Vandalism, revenge, and counter-revenge explode across the quiet Massachusetts community. Finally, Henry decides that the only way to escape trouble is to fulfill his brother's wish to hike Mt Katahdin and he sets off to Maine to do so. Accompanied by a rescued stray (who he calls Black Dog), his best friend Sanborn, and an unlikely compatriot (and fellow sufferer), Henry embarks on a trip that will change his life and the way he looks at trouble.

A remarkable and beautifully-written novel. From the very first page, I was blown away by the richness of Schmidt's prose. And while I sometimes wanted the story to move along at a quicker pace, there was little in retrospect that I would have gone without. Schmidt impressed me some time ago with his Wednesday Wars but here he absolutely outdoes himself. It's very rare for me to admire a story without even the slightest girlie element (and you really can't get more manly than the roadtrip-boy-and-his-dog genre), but this is truly a stunning book.

What's to like? I've already mentioned the writing, but there are other things that make this book shine. Characters. Every character in this book (even the supporting cast) are outstanding. Henry's struggles between grief, anger, guilt, and vengeance play surprising well (given the complex evolution he undergoes in this story). Chay is amazingly complex and his own grieving process is quite moving in the end. Sanborn provides some levity. But the best part is Black Dog, who utterly steals the show as the most lovable literary canine since Winn-Dixie (and I am not a dog lover, so you should be very impressed by this endorsement).

And then there is the story. It would have been so easy to just write a stages-of-grief book (Henry passes from denial, anger, grief, etc. and ends up with acceptance), but Schmidt has much higher expectations for this book and he surprises us even on the last few pages. Nothing is predictable, yet it is all plausible and when everything is revealed and in the open, the sheer tragedy of it all is devastating. No detail is superfluous. In sum, this is a master storyteller.

what genre is this?

You mean, aside from being Young Adult? It's basically a coming of age story.

Im guessing its Realistic Fiction, but i just wanted to make sure..

In general, I tend to focus on contemporary realistic fiction here. When the work is historical or fantasy, I'll probably ID it as such. Hope that helps!

Yup! i just had to do a project on a realistic fiction book so i wanted to do this one...was it one of your favorites or did u just like it?

This is actually one of my favorites. I have a ratings page where I give between zero and four stars to each book I review:

This book is one of the very few with four stars.