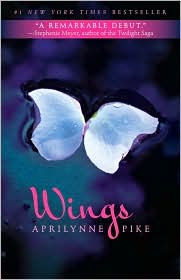 After ten years of homeschooling, Laurel starts school at Del Norte High in Crescent City. She quickly befriends a boy named David in her bio class and things proceed relatively normally, but Laurel is anything but normal. She's a strict vegan, hates swimming in the sea, and one morning comes to find a flower growing out of her back. She and David are mystified by the latter development but quickly they discover lots of other odd things (she has no pulse, no blood, and she doesn't breathe oxygen). That would probably keep the story interesting enough, but when her father gets sick, things start getting a bit more frantic.

While the pacing in interminably slow, I actually rather liked the direction the story was taking in the beginning. Pike has a lot of fun re-imagining puberty from the perspective of a plant. That itself would have made a pretty good book. However, the point is really to bring this around to be a story about faeries and trolls and (a little) magic. That works too, but it's not nearly as interesting. The latter half of the book becomes a fairly standard fantasy adventure with death-defying and guns and battles, which seems a bit of a let-down (or as if Pike felt that the story needed to go somewhere else). I wanted something more ambitious and less formulaic. This isn't bad, but it's nothing new.
Posted by Paul at 8:03 PM