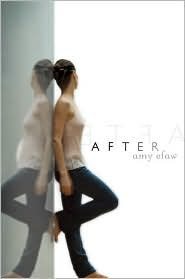 OK, so I'm prejudiced on this one, as it is placed in Tacoma WA and the author has definitely done her homework (the geographic details are superb). When you spend your day working at Tacoma General and then you find that your nightly read is situated there as well, it's pretty cool. And hey, the last time Tacoma featured in any part of YA culture it was as a stand-in for Seattle in Ten Things I Hate About You, but I digress....

As our story opens, Devon finds herself lying on the couch under a blanket and feeling sick to her stomach. But within a dozen pages, we learn that she's just given birth and abandoned her baby to die in a trash can out back. The problem is that Devon has no idea that it has happened. She can't even remember being pregnant in the first place.

It takes the rest of the story to help us understand how that could happen and what Devon has gone through. It's not a terribly pleasant trip (neither the subject matter nor the heroine are easy to deal with), but ultimately Efaw has a lot to teach us about teenage pregnancy, juvenile justice, mental states, and the lengths to which people will go to deny reality.

Devon is a difficult character to like, and my more regular readers know that I'm not a big fan of the unlikeable character. However, I found Devon fascinating and thus irresistible. She does some amazingly stupid things throughout most of the book (some would say all of the way through the book!), but I could understand her motives and even sometimes sympathize with them. And, far more importantly, she didn't do anything out of meanness or viciousness. Teen stupidity I can tolerate. Most significantly, Devon's cluelessness had a purpose and was part of the story. In sum, it worked.

The story suffers a bit more. Efaw is so interested in downloading information to us (about the juvenile justice system, dumpster babies, etc.) that the book has to resort to lecture mode (usually done through the mouths of an expert -- the lawyer, the psychiatrist, etc.). It gets old and it gets boring. I call this the Judy Blume curse -- the writer wants so badly to teach us something that she doesn't care what it does to the pacing of the story. The only solution to this literarry misfortune is the editorial axe: if the information cannot be revealed as part of the story, then it doesn't belong in the story.
Posted by Paul at 8:58 PM