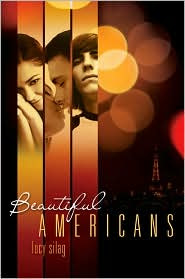 Four teenagers (Alex, Olivia, Zack, and PJ) get to spend a year at the Lycee de Monceau in Paris. As you would expect, there will be joy and tears, mischief and love. But in this story, there is also scandal, sex, drugs, and a shockingly askew moral compass. If that works for you (or doesn't bother you), then there is plenty to enjoy here.

Alex is the spoiled and narcissistic one, who thinks mostly of herself and freely spends her mother's money until her Mom shuts off the Amex and stops sending money. Then Alex resorts to stealing and exploiting the other kids. Surprisingly, she is surprised when this all comes back and bites her on the derriere.

Olivia wants to dance in the ballet and has a real talent for doing so. But when her family comes for a visit, she has to face up to the fact that she doesn't want to pursue her dreams the same way that her parents do. No major breakthrough here, but a little ol' standard Afterschool Special scenario...with a little ol' R-rated twist.

Zack is the closet gay boy. Running to Gay Paree to explore his other side (and to get away from his stereotypical Southern conservative upbringing), he proves reluctant to actually make the moves. It's sweet, but again never moves far away from the second dimension of character building.

And finally, we have PJ, who has barely escaped from the United States before her parents are arrested. She tries to get herself into the graces of her host family so she doesn't have to go home to the US and have folks know what happened to her parents. What she doesn't expect is that her French host family have much darker secrets to hide...and what she also doesn't seem to realize is that there is a US Embassy in Paris to which in-danger Americans can turn (but since Silag is more interested in creating drama than realistically addressing problems, I'm sure THAT small important detail was judged to be too boring!).

It's not a badly written story. The characters are a bit flat and more than a little repellent, but the setting in gorgeous and there's enough action to keep the story moving. What is lacking though is plausibility. This is, without a doubt, the most poorly supervised group of teens in France. Authority figures never play much of a role in YA, but the extremes to which these kids go suggest outright child neglect (and not even the French would tolerate this sort of situation). I'm OK with a little fantasy here and there, but when it's stretched this far (and when it borders into child abuse, neglect, and endangerment) then I have to put my foot down. This is a trashy book -- a well-written, but ultimately trashy book. You may like it, but don't take it too seriously.
Posted by Paul at 7:29 PM