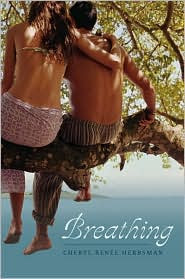 Savannah was named by her mother after the destination of a hurricane, but she hardly feels that powerful. Instead, coping with her strict Mom, her obnoxious little brother Dog, and her asthma, she struggles to get through her 15th summer in her rural Carolina home. While abandoned by her friends who have gone to see family or attend sleepover camp, Savannah figures that her days are going to be pretty long. But then (as is inevitable in books like these) she meets the Boy who sweeps her off her feet (and who happens to be a real gentleman). That happiness is short-lived though when the boy moves away and Savannah doesn't know if their long distance relationship can last. While no one else believes that her young love is worth such a struggle, she knows in her heart that it is.

On the face of it, this is a light summer romance read (much like the types of books that Savannah herself dives into), but Herbsman has crafted an above-average version of it. I can single out several things I really like about this book.

First of all, there is the setting. I'm not a huge fan of Southern fiction (the cliches wear thin) and I tend to prefer the Southern-light of Dessen or the over-the-top folksy charm of a Because of Winn Dixie. I initially cringed when I read all the "ain'ts" and "ruthers." But Herbsman originally is from these parts and she has a good ear for how people really talk. And so I began to appreciate the dialogue as I got into it. By the end, you began to realize that the community represented in the story wasn't just flavor, but an essential ingredient to the story. And I definitely had a chuckle over some of the sayings in the book (my personal favorite was "feeling as disappointed as a raccoon after the trash truck comes").

Savannah herself is a winner. Never too good nor too horrible, she has a big heart and an irrational stubborness to drive you nuts, but every move seemed true. She is the teen that teens might try to deny they resemble, but she had the right mix of responsibility and carelessness for me.

And finally, there is the mother (this is where I show my age, I suppose, appreciating the parents) who is no saint, but is as far away from the clueless parents of most YA books as you can be. I didn't always like her and she could be hard on Savannah, but she gave good advice and was one of the more successful single parents I've seen in literature. And it was great that the reward for being such a good parent was that she had a good realtionship with her daughter. Adolescence is dramatic enough without always having to pump up the parents as the bad guys.

Kudos to Herbsman for avoiding so many trite stereotypes!
Posted by Paul at 3:13 PM