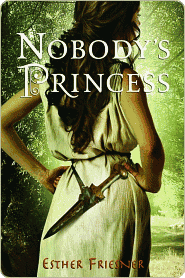 Helen of Sparta is your typical modern fantasy heroine -- terrible at needlework, bored by feminine duties. She'd rather take up the sword, learn how to ride a horse, and set out on a grand adventure. Along with her older brothers, she gets her wish as they travel through the Hellenic Empire.

The adventure itself is surprisingly mundane and mostly serves to illustrate Grecian beliefs and culture -- the most noteworthy part of which for Friesner is the rampant misogyny of the period and the struggles that a woman who wanted to question them had to face. But as is usual in this genre, nothing is really beyond a young woman if she is wily enough to attempt it.

In other words, there is no new ground being broken here. The warrior princess archetype has now become as well worn as the helpless princess type of yore. And Helen is not the most interesting manifestation of the character. Her assertiveness, unbalanced by any humility, comes across as selfishness more than virtue (although I thought the beginning of the novel started out promisingly enough when she started challenging the gods) and overall just seemed like stubbornness. There are some interesting possibilities raised by the grown woman warrior Atalanta, who serves well as a mentor and inspiration to Helen, but she is sent away before the storyline can develop fully (perhaps to return in a sequel?). This is functional historical fantasy, but it doesn't go any where new.

It seems to me that what the genre really needs is a heroine who straddles the gender barriers more convincingly. A young woman who masters needlepoint, poise, and ALSO kicks serious butt with a sword would be interesting. Or one that struggles between not wanting to be perceived as weak and feminine yet also doesn't want to prove otherwise by killing things? So many possibilities to make deeper characters. And I think readers are hungry for female characters who get to be both interesting and introspective at the same time. After all, (to choose an off-topic example) Bella doesn't become the most interesting denizen of the undead world by being either kick-ass or wimpy all of the time (she is interesting precisely because she can do both).
Posted by Paul at 11:09 AM

I really enjoyed Nobody's Princess, but then again, I'm a big fan of the warrior princess. Although, I have to say, I'd be very interested in a story about a girl who is good at needlework, etc. and kicks butt, too. Let me know if you come across one!