The Princess and the Bear, by Mette Ivie Harrison 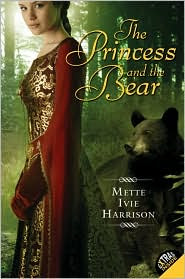 Not so much a sequel of The Princess and the Hound as a story inspired from the myth of King Richon first told in that earlier book. This novel takes Richon's story of involuntary transformation into a bear and expands upon it, telling how the bear and his companion hound encounter the evil phenomenon of "unmagic" and fight to defeat it. The struggle takes them to find the Wild Man, who in turn sends them back in time to set all things right (which involves not just defeating unmagic but also saving Richon's kingdom from both internal and external enemies). Themes of compassion for animals and animals' rights are interspersed throughout to add some moral gravity to this fantasy.

I really enjoyed The Princess and the Hound a lot and I was really looking forward to this book for more of the same. So, it was shocking to find not only a very different story, but such a poorly written one. In her first book, Harrison showed an immense talent for writing deep and richly textured fairy tale, but here the narrative utterly drags. In part, the story is hubbled by characters that cannot communicate verbally for a bulk of the book (not a single word of dialogue is exchanged between them for the first fifty pages). The prose is written past passive and is lethargic and boring. The characters, their actions, and what motivates them are difficult to follow. In sum, I found the whole thing a chore to get through. Everything I loved about the first book (originality, engrossing characters, beautiful story) is missing here. It is as if unmagic has sucked everything good out of Harrison's writing and left behind a gray mass.
Posted by Paul at 2:33 PM