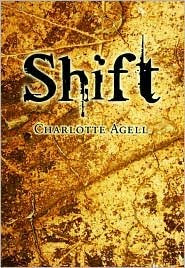 In a dystopian future, state religion has replaced the world we know with a fear-driven society. The only alternative to the HomeState world are the nuclear wastelands of the Deadlands and the wilds of the north (current day Maine) beyond them where the crazies live.
When 15 year-old Adrian's best friend is seized by the police because he is Jewish, Adrian sets off on a trip into the North. The disappearance of his mother (right after she has been found babbling about a coming "shift" that will change the world) is just one more motivator. Terrorists, crazy computers, and a penguin figure in as well.
The overall result is a seemingly random story. It all starts off well enough as a road trip tale, but as soon as the characters cross over into Maine, that storyline gets abandoned. And what it gets replaced with simply doesn't make sense. After a while, I simply gave up trying to follow the story. I'd like to suspect that the earlier drafts did make sense but somehow it all got mangled in revisions and editing. What I did get out of it was that the author was trying to merge some of the wonder of life in Maine (and witnessing the Aurora Borealis in particular) with a diatribe against religious fanaticism, but what a frustrating mess!
Posted by Paul at 12:24 AM