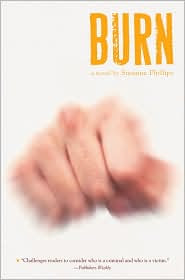 At the beginning of his Freshman year, Cameron makes the mistake of showing up late for a gym meeting, and showing up with long hair and his Mom in tow. The incident earns him the name "Cameron Diaz" along with a slew of epithets from bully Rich Patterson and his football buddies. The name-calling escalates to physical abuse and then assault. In response, Cameron withdraws and starts to fail academically. Unable to get any effective intervention from the teachers or administrators, life at school becomes a living hell. Eventually, it all ends badly and tragically.

I found myself sucked in by the story as it progressed, but more out of horror than out of interest in the story. The book itself is well-written, with decent dialogue and realistic characters, but there were several things which bothered me about this novel:

1) The lack of sympathetic characters. As I've noted before, for me a novel has to have a character I like, one the redeems him/herself, or one that draws me in. Cameron isn't any of those things. He's abused and been through a lot, but he turns out to be just as evil as the bullies (and doesn't ever seem to face that fact). I was never able to warm to him.

2) The incoherent plotting. Somewhere in the book, we learn that Cameron suffered abuse from his father, but the idea is never really developed. Yet, despite never being introduced or developed as an idea, this abuse suddenly becomes important in the end. Another example of the plotting problems is that the story spends the first 166 pages being about bullying, but then suddenly becomes a half-hearted story about homicide and temporary insanity. While I get the link between the two that Phillips is trying to draw, it is never really connected (the best attempt is Cameron's Mom's pleas for mercy because of the prior assault and the damage it had on Cameron, but everyone - including the author - ignores her).

3) The aimless and unresolved subplots. Probably related to my previous point are all the ideas that are left out floating in this story, including (but not limited to) the special ed kid in history, Cameron's self-harming behavior, the arson in the woods, the relationship between Cameron and his brother, any of Cameron's friends, Randy's relationship to Cameron's family, and so on. In retrospect, it almost has me wondering if any subplot was resolved.

In sum, this is an easy book to get lost in and if that is what you want from a book, it will do the trick. I'll reiterate that the characters are vibrant and the dialogue is spot on. But it's not a pretty story, and push comes to shove, it isn't really that well-developed of a story either.
Posted by Paul at 2:26 PM