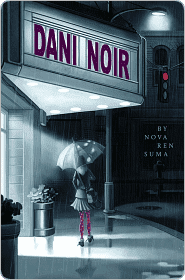 OK, I'll start off by noting a minor conflict of interest. I didn't realize until I read the jacket bio, but Nova Ren Suma attended a Summer writing workshop at Simon's Rock and credits it with starting her writing career. How cool is that?! So, how can I possibly say anything bad about her now?

Dani Noir is the story of 13 year-old Dani whose love of old movies (and Rita Hayworth in particular) combines with her dramatic sense of the world to make her one of the funnier narrators in Middle School reads. She's spending the Summer being bored and coping with her parents' divorce (and her father's plans to get remarried) the only way she knows how: by sneaking in to the local art theater and watching one classic film after the other. But when she discovers that her friend the projectionist is cheating on his girlfriend (her very own beloved ex-babysitter!), she decides to take matters into her own hands and expose the no-good cheating scum!

Dani is a pretty self-absorbed child, but younger readers will appreciate her good intentions and older readers can get a chuckle from her misadventures (and her obsession with the noir films). I have no idea whether younger readers will even understand what she is going on about, but this is one of those books that will probably hook a few 10-12 year-olds on classic films. No harm in that! If nothing else, it will give the kids something to discuss with their great-grandparents. That said, the story is a bit predictable so no major page-turning excitement here, but it flows nicely and Nova Ren Suma has a nice style which hopefully she can re-create in her next novel.
Posted by Paul at 2:06 PM