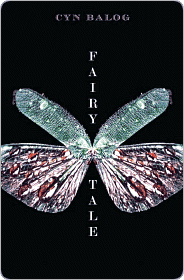 Morgan and Cam are as close as a pair of nearly-16 year-olds can be. They've been friends since birth and are something of a star couple at school. But when Cam finds out that he is actually a changeling (a fairy prince swapped at birth with his human brother) and that he must now return to the world of the fairies forever, everything threatens to come apart. Morgan wants to fight to keep him, but as the day approaches even she begins to doubt her efforts. First of all, there is her uncanny ability to explain the future (which tells her that she will fail) and then there are her growing feelings for Cam's human brother Pip.

Morgan's ability to foretell the future is a bit of a red herring in this story (while an integral part of the introduction, it never really factors in to the rest of the story), but otherwise this is an interesting novel. It doesn't read so well on a literal plane (I've read some pretty scathing reviews of the lame characters and plot from teen reviewers), but it has an endearing theme: how much does a 16 year-old really know about finding the man of her dreams? While Morgan starts off the story utterly committed to Cam, even she has to admit that she can't see him in her future. And when Pip starts to tempt her, at first she blames evil magic and spells, but she quickly realizes that there are no spells. Rather, this is all her own doing. I found that a far more interesting storyline, but maybe not the sort of thing that teen readers will appreciate as much as I.
Posted by Paul at 8:01 PM