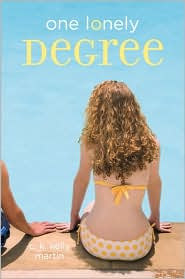 Finn is a fifteen year-old girl living in Ontario with a whole series of problems and issues including:

1) A childhood friend Jersy who reappears;
2) A best friend Audrey who falls in love with Jersy and then is forced to spend a Summer away, during which the inevitable happens between Jersy and Finn;
3) The memories of a sexual assault at a party the previous Fall;
4) Parents who are separating and a mother who can't cope with the stress of the breakup.

Whew! It's hard just keeping track of it all.

And that's really the crux of my problem with this book. It's not that Martin isn't a good writer (she definitely is!). She's got a decent ear for dialog and throws in the right amount of chick-friendly stuff to help this qualify as decent consumer-grade YA, but the story has a terribly busy plot (or plots). Any one of these story lines would have made a good book (and many good books have been written using just one of these plot lines), but trying to do it all inevitably means not doing any of them well. The romantic triangle never develops any tension, the parental separation hangs out there, and the sexual assault plot remains underdeveloped.

I came away with the impression that in fact Martin didn't know what to do with any of these stories, which is why she kept piling them in and then jumping between them. That's a shame since a good book about cheating with your best friend's boyfriend or recovering from a sexual assault would have been fantastic in the right hands. A disappointment.

And then there is my ongoing criticism of bad book covers. This one really annoyed me. Finn makes a big point of telling us that she has no figure (even noting how flat her hips are). So, why does the model on the cover of this book have to be Ms Shapely 2009? It's bad enough when they have to put some sort of pencil-thin waif with a big butt on the cover of a book to sell it, but when the author has clearly indicated that the character is not like that? Shame on Random House for stooping to the lowest common denominator! And why don't they get an art editor on staff who actually bothers read the book!
Posted by Paul at 5:42 PM