(Re) Cycler, by Lauren McLaughlin 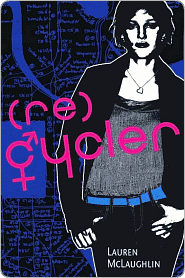 Cycler introduced us to Jill, the girl with an odd pathology of turning into a boy (Jack) once a month instead of getting her period. It was an unusual premise with a lot of promise that McLaughlin exploited to turn into a story about sex roles, gender identity, and teen angst all rolled up into a fun romp. (Re) Cycler picks up where the first story left off as Jill/Jack and Jack's girlfriend Ramie have moved to Brooklyn to establish some anonymity, get Jill a job, and give Jack and Ramie some quality time together. Jill's boyfriend Tommy drops them off before heading out West to find himself, leaving Jill as the odd person out. She struggles with how she feels about being abandoned by Tommy, how she feels about Jack and Ramie, and how she feels about Ramie herself. She also struggles a bit with the dating scene in NYC. Given the rather regular metamorphosis that Jill and Jack go through, things are bound to get confusing and complicated, especially when they start changing back and fro in front of their partners.

I actually got a bit worried as I started reading this that it was going to be a lame sequel. After all, it was a clever little idea that guaranteed that the first book would be fun, but where could you go with the story? The first 100 or so pages did not seem very promising and I almost gave up hope. However, by the second half of the book things really take off (the sex scene from pp 184-191 is a masterpiece). Characters (like Ian and Natalie) who seem totally boring in the beginning become much more interesting as the story progresses and they become multifaceted. Somehow, it all picks up.

The only thing that really bothered me was the ending (not to reveal the details, but when sworn enemies become friends I tend to twitch and there were no small number of major items that stay unresolved). Perhaps, the simple fact that Jack (never all that articulate) somehow becomes introspective enough to make the concluding remarks rubbed me the wrong way.
Posted by Paul at 7:48 PM