The Spectacular Now, by Tim Tharp 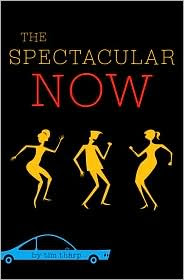 In a bit of a departure for me, this is the story of Sutter, senior and party animal extraordinaire. Once he "fortifies" himself with whiskey and SevenUp, he's everyone's favorite dude (at least in his own mind). Told in a train-of-semi-consciousness narrative, Sutter lurches from one party to the next, never bothering to spend too much time sober. But he's the sweetest alcoholic you've ever met -- generous to a fault and insightful about others (yet blind to himself and his own faults). Given that we never see the world from outside of his blurry eyes, we can get a bit suspicious about his intentions and veracity, but it is obvious he has a heart full of good intentions. Meeting a shy withdrawn A-student named Aimee provides an opportunity for him to re-examine his ways, but it's not terribly reasonable to expect someone who is this far down the path to self-destruction to change their behavior. Think of this as Catcher in the Rye meets Leaving Las Vegas as Holden Caulfield and Ben Sanderson are merged together.

This is a beautifully-written story about a truly complex character. You feel torn between respect and revulsion at Sutter and his behavior. It would be easy to hate him for the way he destroys the people around him or for his own personal cluelessness, but then he does something terribly sweet or kind. And while one could say that he harms Aimee, it is also possible to say that he did her a world of good. Nothing simple and straightforward here. Tharp is a master at portraying this complexity and never quite letting us off the hook.

The story itself is so fluid that you never really want to put this book down. Part of the reason for this is that, while the story is terribly tragic, Sutter is so adamant about keeping us in a happy "now" moment (and Tharp honors his character by doing so) that we never really get a chance to wallow in the misery until we silence the narrator by putting the book down. Recommended.
Posted by Paul at 10:58 AM

I just reviewed this myself. What a book! I wanted to hang out with Sutter at the same time as I wanted to perform an (ultimately doomed) intervention. Have you read Tharp's other book, Knights of the Hill Country? So different, and yet the setting is exactly the same.

I have to admit that I have an aversion to sports books (and football in particular) so I'd be unlikely to pick up Tharp's other book. Perhaps I should try to get over that phobia and tackle it (so to speak!).

I don't get sports at all, but somehow I always wind up reading and reviewing sports books. Knights of the Hill Country wasn't so much about football as it was about the team, mostly the main character and how he functioned, and how his changes affected everyone else. He's like the anti-Sutter. Found my review!