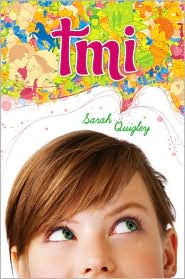 Becca has a bad habit of sharing aloud whatever is in her head, which often leads to embarrassing situations. After her overly blunt appraisal of her boyfriend's kissing prowess (or lack thereof) gets her into a heap of trouble, she makes a resolution to start guarding what she says. Instead, she pours her private thoughts into an anonymous BLOG. But, as one could easily predict, the anonymity is fleeting, threatening embarrassment and far worse for Becca and her friends.

One major problem with this book is its intended target audience. Becca and her friends are tenth graders and their conversations can stray into some mature topics, but for the most part they act like Middle Graders and the story's fairly simple lessons seem more geared towards 11-14 year-olds. With a highly predictable outcome and mostly chaste storyline, older readers won't find much here. Quigley seems to recognize this issue and even apologizes for her heroine's immaturity at one point (for having Becca reading Forever so late in life). All things considered, I'll probably consider this a book for younger readers, but it's wildly inconsistent.

That comment aside, I found the story largely set-up and staged. The surprises are telegraphed so much that anyone who can't figure out that one character is gay and that the BLOG is going to become public knowledge is really just a poor reader. The major life-lessons (avoiding gossip, respecting others' privacy, and not sharing secrets in the first place) are driven home to death.

Finally, I do get so tired of YA writers who insist on making their characters share the author's own interests. Yes, the 1980s seriously rocked and I certainly am of the school that not much of cultural significance has happened since Purple Rain but I'm well aware that teens don't share that point of view. So, let's stop creating fictional teenagers who worship The Breakfast Club and Sixteen Candles. Enough!
Posted by Paul at 9:57 AM

Big giant WORD on your beef, but I have to add my other beef. It's with authors who are always setting their YA novel in the time when they were probably teenagers, instead of now, especially when nothing about the story demands that it take place in the 80's or the early 90s or whatever. Laaaaazy!

I agree absolutely! I'll admit that I get a bit intimidated by trying to accurately portray the teen world of today, but mostly because of how technology (texting, iPhones, etc.) have changed the nature of how young people interact. But when you put that aside, most YA novels are autobiographical enough as is, so putting the setting back in the 80s or 90s is not "historical fiction," it's lazy and uninspired.