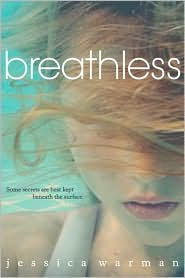 Katie lives in a troubled family. Her mother is an alcoholic and her father is overbearing (and ironically also a psychotherapist). As her older brother begins to lose his grip on sanity (implicit because of parental abuse), Katie is torn between her sibling loyalty and acknowledging the tragedy (which means allying with her parents). Katie's parents, recognizing that the environment has grown poisonous, decide to ship her off to boarding school. There, Katie tries to hide away the secret of her brother's illness and lose herself in team swimming. She's a great swimmer, but it's a talent that stirs up the jealousies of her classmates, particularly when she starts dating the captain of the boy's team.

The very first chapter of this book is stunning and sets a very high literary bar for the rest. That one section alone merits this book special consideration.
Overall, the quality of the the prose is spectacular. However, the story itself has an odd pacing that eventually wore me down. An intimate story like this needs a tight timeline, but instead Warman decided to stretch her story out over three years. To make this work, you can't push the speed of events (that would destroy the intimacy) so instead she lets the story jump ahead long periods (often in 8-9 month stretches) at regular intervals. This advances the story but sometimes leaves us missing key details so she has the narrator recap key events that have occurred in the intervening months. Since this catch-up is distant and rushed, we lose the closeness we feel when things are evolving in real-time. Threads developed so carefully and meticulously in one time period become irrelevent in another (these are teens, after all, and nothing stays permanent for 8-9 months!). At the end of the story, Warman does make a good attempt to pull it all together, but after so many cases of narrative whiplash, this was a hard story for me to digest, no matter how beautifully it was written. A near miss for me!
Posted by Paul at 7:38 AM