Carter Finally Gets It, by Brent Crawford 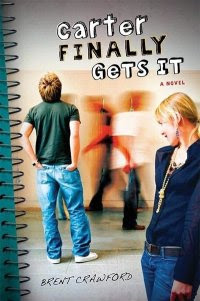 S'up dog? Sometimes you have to go off the deep end and read a book from the other side...

Carter is 14, mildly handicapped by ADHD and slightly more so by his hormones. He has trouble making coherent sentences and even more trouble staying focused when there are bare midriffs and breasts in his line of sight. High school is a big shock for Carter and harder than anything he ever imagined. And no matter how much he tries, he finds his efforts are never quite enough. Each little success he experiences (becoming a kicker, dating Abby, getting a big part on the swim team, etc.) seems to fall through for him, but Carter keeps trying to do his best.

Carter is also often clueless and you'll spend most of the book shaking your head in disgust at how obnoxious, immature, and ...well...14 years old he is. There is a requisite amount of farting, ogling, puking, and boy humor to make anyone over the age of 14 want to hurl. Personally, I never was like Carter, but I have to admit that I knew people who were like this, so I'll vouch for the accuracy of the portrayal. For anyone who's ever felt that boys (or even men) were pigs, this will reinforce the stereotype.

But it's often outrageously funny. Carter can be such a moron at times, that you have to shake your head and like the kid. And in the end, that is what makes this story work as a comedy. He can be cruel and mean, jealous and violent, but in the end he's sweet and his heart is in the right place (even if his brain is in his crotch!). He'll do the right thing in the end without ever really understanding why, but he'll come through. And, in making a character like Carter, Brent Crawford has crafted himself a winner!

I'm looking forward to the sequel coming out this Spring!
Posted by Paul at 8:13 PM