How to Say Goodbye in Robot, by Natalie Standiford 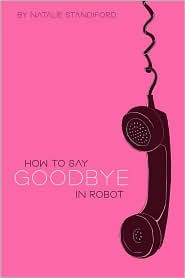 In something of the quirky tradition of YA buddy novels like Stargirl, this is the story of a new girl in town (Bea) who befriends an outcast named Jonah (or the "Ghost" as his classmates call him). Their offbeat relationship consists of hitting up a favorite dive bar, listening to the same late-night radio call-in program, and a series of outrageous stunts. A small amount of drama is introduced when Jonah discovers that his twin brother (allegedly dead for the past several years) may actually be alive. This discovery initiates a search and an adventure for the two friends.

More John Waters (the book is placed in Baltimore) than Jerry Spinelli, the book stays away from most familiar teen tropes, and without much doubt this is one of the more original books of the year. The relationship between Bea and Jonah is complex (admittedly bordering on romance, but never consummating it). The result is sophisticated and refreshing.

Quirky books can make for difficult reading and there will be people who love this book because it is so difficult, while others will long for something simpler and more straightforward. I'm generally a fairly lazy reader so I prefer less challenge, but I could see why this might appeal to others.

My overall criticism of the book, though, comes from trying to figure out what was the point of the story. Bea is supposed to have gone through some major character growth (transforming herself from a "robot" into a loving young woman) but I never got that sense of growth. And the subplot about her parent's relationship difficulties seemed poorly developed (and maybe even a bit too cliche for this type of story). Overall, not a lot to really grab you. So, kudos for a creative and quirky pair of main characters, but a thumbs down on what gets done with them.
Posted by Paul at 8:25 PM