I Need You More Than I Love You and I Love You To Bits, by Gunnar Ardelius 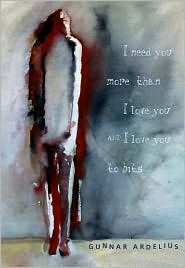 According to the blurb on the jacket, this is the story of a young couple who struggle with their feelings for each other and with the boy's fear that he is becoming like his mentally unstable father. However, I'm not sure I got even that much out of this book, so I make no claim to that interpretation of the book's contents.

Honestly, I really wanted to like this book, which was deemed significant enough to be translated from Swedish into English. Told in nicely written short prose vignettes, the unusual style and design of the story seemed interesting and unique, and when you've reviewed 700 books or so, you're desperate for unique! But no matter how much praise people want to heap on this book, the reality is that it is a vague and inconsequential piece. And I'm not one of those folks who dotes on difficult-to-read tomes and declares them good. The characters are undeveloped, the vignettes are sometimes so vague that you can't tell who is involved, and the story is largely undeveloped and untold. As a mood piece it might work, but there's no real mood to express.

The book can boast pretty words on the page and the occasional moment of melancholy, but the emperor has no clothes and this is no literary achievement!
Posted by Paul at 9:19 PM