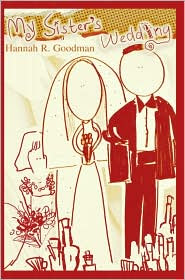 Madeline Hickman reads a lot of self-help book. In some other story, Maddie's obsession might be the cause for some amusement, but when your older sister and your boyfriend are both alcoholics, learning about the dangers of enabling might be considered self-defense. Add in a brother-in-law, mother, and father who are in denial and you have a massive dysfunctional family on your hands. Surprisingly, the wedding, from which the book's title comes, is actually only a minor part of this story about family and the ways that people lie to each other to get through life -- a description that probably makes this slim novel sound a lot more depressing than it it. Comedy it may not be, but Goodman keeps everything light enough to get us through.

There are plenty of books about alcoholic parents and alcoholic teens, but I don't remember reading one about alcoholic older siblings. And combining both an older addict with a younger one, and putting the heroine between them, is a powerful literary tool. As a result, this book stood out as something different.

I did have some problems with the tone of Maddie herself as she fluctuates maddeningly between mature and insightful and downright clueless. Similarly, younger characters in the story suffer from underdevelopment. Goodman is better with the adults, particular Maddie's mother and grandmother (and their relationship with each other), than she is with Maddie's boyfriend and friends Peter and Susan. I never really could tell what the purpose of the Peter-Susan subplot was (and don't even get me started on the non-story of the super nice could-become-a-boyfriend Sean!). In this book, the kids and their problems are fairly unimportant to the plot.

I DO look forward to Maddie's further adventures and hold out hope for her development, but this first book is really a story of Maddie's family and for that it succeeds remarkably, painting a much more complex family dynamic than we usually see in YA. It is nice seeing adults acting like adults (being neither checked-out nor stellar role-models). And we have a nice realistic foundation for future stories.
Posted by Paul at 3:40 PM

Thanks for the review of My Sister's Wedding! I look forward to seeing your thoughts on the other books! Thanks again! Hannah