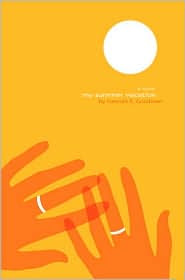 Picking up a few months after My Sister's Wedding ended, this sequel continues the story of Maddie Hickman's struggles with family and friends, and in particular with her troubles with enabling her alcoholic sister. The story takes place mostly at a special art summer camp, where Maddie is serving as a counselor-in-training (CIT) and mentoring the creative writing group. She's gone to this camp for many years and is excited to see her old friends, as well as to get away from all the troubles at home. The summer, however, presents new problems: old friendships are ripped apart by jealousy and two new arrivals -- both boys -- challenge Maddie (the first one obsesses over the idea that Maddie looks like his girlfriend who just recently died, the other is obsessed with Maddie in a more romantic sense). But a summer like this is not challenging enough as is. Maddie also has to deal with her sister going off the wagon and her ex-boyfriend Justin trying to contact her.

The strengths and weaknesses of this novel are very similar to those of the first installment. Goodman does a good job with her grown up characters but struggles far more with making her teenagers come alive. Even as I read the book, I had trouble putting my finger on what the issue is. The situations are believable and the squabbles that Maggie and her friends get into are plausible. There's the old annoying bit about a teenager with an obsession for movies from the 80s (and a 70s-era obsession in music) but I've seen it in so many books now that I tend to forgive it. No, what I came to realize by the end of this book is that Goodman just pushes through her youth scenes too quickly. The result is that she (through narrator Maddie) is more telling us what is going on (like an anxious teen recounting an adventure) rather than showing it to us. Surprisingly, the same thing doesn't occur with then grownups. The contrast is quite disconcerting.

This particular book also committed the cardinal literary sin of having a dramatic shift (completely out of the blue) occur in the last 20 pages of the book. I won't spoil it by telling you what it is, but it is safe to say that absolutely nothing in the book provides foreshadowing for it. And none of it was really necessary. The story being told (Maddie continuing to work on taking control of her own life) was interesting enough (even if it was being told at breakneck speed!). To add an entirely new twist in the final inning and allow so little time to develop it is frankly bizarre!

Let me conclude on a positive note. If I was impressed with the way that alcoholism and its effects on loved ones was portrayed in the first book, this second book just takes that to a higher level. Goodman has done her homework (or speaks from a good deal of personal experience) because I not only found myself learning things about addictive behavior, but was genuinely interested in what was being taught. To the extent that these novels are really about Maddie's alcoholic sister and how Maddie and her family deal with that part of their lives, there is some really good stuff going on here. It feels true and also reveals a great deal about the human condition. Oddly enough, there is a real gap in YA lit for books like this and so this contribution recommends this book.
Posted by Paul at 8:29 PM