Once Was Lost, by Sara Zarr 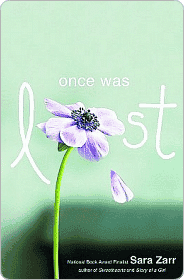 Samara and her father, the pastor at a local church, have a fair share of problems to cope with. Sam's mother, whose always managed to exude a stable presence in public has been ordered into rehab, having proven unable to hide her alcoholism and crashing her car. Dad, not used to being a single parent, is both struggling to keep the house and their finances together and trying to find the words to talk with his daughter about the changes in their home. Sam is just sad and unable to express her feelings about what has happened to her family. But then things get much worse when a girl from their church is abducted by a stranger. In the ensuing two weeks, Sam comes to question her friends, herself, and her God.

Prior to this story, Sara Zarr has written a strong book (Story of a Girl) and an outstanding classic (Sweethearts -- which is in the very small number of books with a **** rating from me). This third novel doesn't really live up to those. The plot is quite ambitious but entirely too busy and unfocused. In addition to the recovering alcoholic mother (a storyline done much better in the recently-reviewed My Sister's Wedding) and the abducted child, there is an awkward romance, a possible adultery, a few struggling friendships, and a promising subplot about a boy who feels a calling to minister (or something like it). In my opinion, the family struggle is the most interesting of the storylines and the abducted-child story just distracts from that plot.

It also does not help that we have character problems. Samara is a difficult heroine to like. She is pretty good in her inner dialogues at analyzing what is going on, but she is so bad at communicating her needs that it is mostly a wasted effort. That difficultly communicating is usually a good dramatic device in YA, but when the character doesn't overcome their inability to speak by the end of the story (at least partly), it just becomes plain annoying. The overall promise for character growth never is realized and so we are left with frustration rather than sympathy.

Overall, the story just felt rough. It all probably seemed like a good idea when the writing started, but somewhere before this got published, someone should have raised a sharpened red pencil to the manuscript and started to slice it up. As for me, I'd have dumped the abducted kid and then worked on developing what was left. But regardless, some editing would have really helped.
Posted by Paul at 9:08 PM