The Sweetheart of Prosper County, by Jill S. Alexander 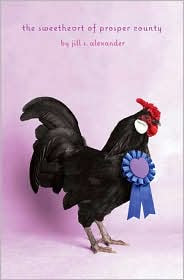 Austin is tired of being picked on by Dean Ottmer. In the midst of watching the annual No-Jesus Christmas Parade, she comes to a realization of how to get him to stop: she will win a place riding on the hood of a car in the parade in a sexy dress, waving at the crowd, and rising above her tormentor. But to do that, she first needs to raise a champion rooster and win the County Fair, join the FFA, and get elected as their Sweetheart so she can be in the Parade. Determined to realize her dream, she sets out to do exactly that. Along the way, she struggles against her own insecurities and her mother's possessiveness to find herself in this heartwarming story about personal growth. Some good friendships, a potential romance, and a softly-pitched story about racism and adult hypocrisy also figure in.

This gentle book presents plenty of potential tension and drama, but never falls in too deeply. Austin has her share of danger, but comes through everything just fine (as does her bird). The relationships are largely platonic, the friendships rock-solid, and the bullying surprisingly tame and amateurish. One reviewer called this "a teen book for tweens," and I agree. The heroine may be 14 years old, but much younger readers will enjoy her story.

The plotting of the story can lurch at odd speeds, sometimes lingering for too long on unimportant details and sometimes jumping quickly ahead when Alexander decides that some part of the narrative doesn't deserve telling. But in the midst of this novel, there are some breathtakingly beautiful pieces. The description of Maribel's quinceanera is one of the best-written passages of YA that I have ever read. The grappling scene with the catfish is bizarre yet an extremely ambitious literary accomplishment. The author, in sum, can certainly write. So, if this book suffers a bit from unevenness, it certainly seems possible that we could expect great things to come in a future novel.

As a result, I'd recommend this book both as something fun to read and also for its occasional brilliance. It's not the best recent book out there, but it's in a small crowd of contenders.
Posted by Paul at 8:52 PM