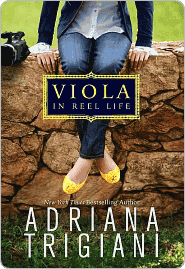 Because her parents have embarked on a trip to Afghanistan to film a documentary, Viola gets dumped at a private school in South Bend IN. It's a long ways away from her native Brooklyn. But while Viola is sure that she will hate things at the school, she quickly is won over by her three roommates and by the school itself. And she discovers that her talent for filmmaking makes her stand out as someone special in the school community. She contributes her technical expertise to the school play and leaves a big mark. When she is invited to a freshman mixer with a neighboring school, she decides to take a risk and attend it. Within minutes, she meets the perfect boy (a fellow filmmaker) and falls in love. The boy tells her about a film contest for high schoolers and now she has a goal -- to submit a film worthy of winning against her peers.

Trigiani is better known as a writer for adults and this is her first YA novel. This shows in certain ways. For example, Viola's voice is very hard to pin down. I found it a bit too mature but I have noticed that other reviewers think she sounds immature and too young. Let's just say that it doesn't always ring true.

Far more bothersome for me was that the story has no drama or tension and an almost flat dramatic arc (this is especially ironic as the lead character makes a big point about explaining the importance of an arc in telling a story -- so Trigiani obviously knows that it is important). I came to the conclusion that Trigiani purposely chose to avoid conflict in her story (to break the YA conventions, she made Viola happy, adjusted, successful, and popular). I guess it is something different, but what's really the point? I kept waiting for something bad to happen so Viola could have a growth experience, but that isn't what this book is about. As a result, I found it all rather dull.
Posted by Paul at 9:35 PM