The ABCs of Kissing Boys, by Tina Ferraro 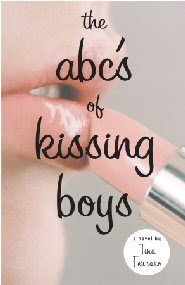 Ok, so I'll have to admit that between this book's title and its cover, my manhood felt a bit too threatened to read it in public. That's probably a bit of a shame, because this is a decent read that shouldn't be limited to a female audience...

Parker has had her hopes on getting into varsity soccer for some time, so when she discovers that she will be one of the only juniors who is stuck in JV for another year, she realizes it is time to hatch a desperate plan to win a spot with the big girls (and her former friends). Through some convoluted logic, she comes up with a plan that involves her older brother's handsome friend, a large bribe, and a kissing booth. The only catch? The handsome friend insists that before any kissing takes place, she'll have to get some lessons so she does it "right." That takes an even more awkward turn when Parker enlists her neighbor's son (nearly a year younger -- and two grades behind her) to give her the education she needs. And while getting on varsity is what Parker needs to maintain her status and self-respect, being caught kissing a freshman could easily damage her far worse.

It's a silly story, of course, with a plot that's so farcical that it's actually believable, but it has a lovely charm to it. And while the middle drags and the ending ties things up way too conveniently with a combination of coincidence and predictability, these are the kind of fluff that make enjoyable reading. The key of the book's success is the characters. Parker is shallow and cruel to people who deserve to be treated better (her old friend Becca and the boy next door Tristan) and way too sycophantic to the evil Chrissandra (where on earth did that name come from?!), but she has a lot of spirit and a decent enough moral compass to guide her through her authentic adolescent lack of judgment. And that mixture of good and bad makes her very appealing.

Ferraro knows her audience and doesn't condescend to them (no one here is stupid and their behavior is never criticized). The key theme throughout is insecurity and finding self-worth. And it's a message that appeals to readers who are trying to do that. Of course, you want to smack these kids in the head and tell them that they don't need to study kissing (or put up with nasty bullies or turn against their friends to become popular), but that isn't how it plays out in the teen years and Ferraro gets that right.

There is no deep meaning buried in this novel and very little long term redeeming value, but that means that a book like this can be safely enjoyed for being fun to read. And that's more than enough!
Posted by Paul at 9:09 PM