The Carbon Diaries 2015, by Saci Lloyd 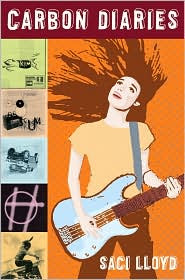 After an environmental cataclysm nearly floods England, the UK decides to pioneer austere carbon rationing in an attempt to counter the effects of global warming. The result is chaos and disorder as the severe cutbacks destabilize civilization. Worse, it doesn't reverse the damage. Instead, over the course of the year 2015, blizzards, cold snaps, drought, and flooding inundate London.

Told through the diary entries of Laura Brown, who would rather play bass in her punk band The Dirty Angels, the global events share importance with the major daily events in her own life of that year (reconciling with her sister, grades at school, trying to be noticed by the boy next door, dealing with her splintering family, etc.). The trouble is that the events all conspire together to overlap and intertwine in her life.

This is an engaging science fiction novel of a near future where the effects of global warming have become too vivid to ignore. I was a bit put off by having it placed so soon in the future (the book will not age well) but I get the author's point of wanting to make sure that the immediacy of the events would be acknowledged by readers. And while I would like to believe that the scenario is overly dire, I respect the intent. One cannot fault the plot. The story is engaging enough to make me want to read the sequel that has been recently released.

What worked less well for me was the juxtaposition of Laura's personal life with the devastating world events. There wasn't much connection between the two and I found the one distracting me from the other. Unlike a book like Life As We Knew It which told the story of environmental collapse in purely micro terms (and thus worked), Lloyd is trying to have things both ways. It just doesn't gel.
Posted by Paul at 10:43 PM