An Off Year, by Claire Zulkey 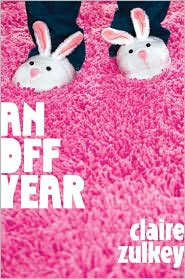 As her father is dropping her off at Kenyon to start her freshman year, Cecily suddenly reaches a moment of intense clarity that she doesn't want to be there. So, she turns to her father and says she wants to go home. Her father, at a bit of a loss for words, takes her home. While Cecily doesn't know what she wants to do next, she does know that she simply isn't ready for college. During the next year, she attempts to figure out why and whether it is something she wants to change.

An insightful story about the jitters and the difficulties of facing change. But for me it never really took off. First of all, because the heroine is sort of a 21st century teen Oblomov (that's college reading folks!) who sits around moaning and complaining about her own lack of ability to motivate. And secondly, because in the process she just comes off as spoiled, coddled, and clueless (anyone here want to guess what tuition/room/board at Kenyon actually costs? it sure must be nice to blow that off!). Overall, it was really hard to relate to Cecily. Ironically, the number of times that her friends and family pointed out to her how spoiled she actually was never really seemed to have any impact. OK, she grew a little by at least understanding a bit about her fears, but she took an entire year to figure it out. Give me a break!

And an old pet peeve about the depiction of my home town: Zulkey has obviously never been to Madison, so don't pay much mind to that section of the book. Madison is hardly a "small town" with a "small lake" (which one? we have four of them!), "cute restaurants, cute theaters, cute stores" (they are nice, but I'd hardly describe anything in Madison as "cute"), and the "main drag" (State Street?!) is actually not home to many head shops. Maybe she should have browsed through Google Earth's 360 view for inspiration! Sloppy research!

So, yeah, original idea with some nice insight here and there, but overall not my idea of a fun read.
Posted by Paul at 7:37 PM

I have been to Madison a few times actually and I like it a lot! Sorry if you felt I shortchanged it. Keep in mind it was written from the point of view of an 18 year old with a limited scope.

(Sorry if it is weird that I am commenting here--your blog came up in my Google alert).

Yes, you know, I could see that. Although given how twisted the POV was, it doesn't really endear me any more towards the character. And I'm not sure that the majority of the readers would get it either. But, as I said, my major issue was that Cecily was really hard to relate to.

(BTW, I'm happy to have you post comments and responses. I took your book to task so you are more than entitled to a rejoinder)