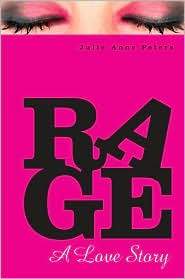 Peters has become one of the leaders in LGBT YA literature and in this novel she probes the dark territory of physical abuse within teen lesbian relationships. It's the kind of topic that could easily have been sensationalized or used as fodder for someone's political agenda, but Peters respects her characters enough to avoid those pitfalls.

Johanna is an emancipated minor, orphan, and gay. After being rejected by her older sister (ostensibly out of grief, but implicitly because of her sexual orientation), she struggles with feelings of low self-worth. She has good grades, a steady job, and volunteer work at a hospice to give her a sense of purpose. However, from the beginning it is clear that Johanna has problems letting people down.

Enter Reeve, the object of Johanna's sexual fantasies (which take place in fairly explicit detail in the mythical realm of "Joyland" that intersperses the book). Through tutoring Reeve's autistic brother, Johanna gets a chance to grow closer to Reeve and at first their relationship - while always rocky - is everything that Johanna needs it to be. The reality of the relationship, though, is considerably darker as is immediately apparent to the reader (but completely unfathomable to Johanna herself). Reeve systematically isolates Johanna, severing her ties with school, work, and friends, while simultaneously battering her. All of this seems understandable, given the horrendous conditions from which Reeve herself comes.

While the gay angle is unique, it isn't really essential to the story as near as I can tell (or at least Peters does not present behavior that could be described as unique to lesbian relationships). So I'll focus on this as a story of abuse in teenage relationships. For me, the gold standard in this genre is probably Sarah Dessen's Dreamland and in that light, Rage doesn't really measure up. The character behavior is realistic enough and the story sufficiently horrifying, but the motivations that would drive the characters are not developed. Certainly, we can imagine how an orphan could fall under the sway of an abusive partner and we can understand how the girls are replicating the environments in which they were raised, but that really is not enough to explain what we are reading.

I found myself more disgusted by Johanna's illusions and weaknesses than sympathetic to them. At some point, her constant refusal to acknowledge what was happening became tiresome and I lost faith in her. And, having so carefully defined how important things like her volunteer work are, it wasn't really believable that she would allow it to fall apart so easily.

Peters pretty much realizes the corner she has painted her story into at the end and attempts a radical about-face to clean up the story enough to offer us some hope. But this is rushed and the characters improve in even less plausible of a fashion than they declined throughout the story. If you are going to show character redemption at the end of the story, you really have to show them working for it and the sweat and tears that would help us understand these troubled women are missing.
Posted by Paul at 9:11 AM