All Unquiet Things, by Anna Jarzab 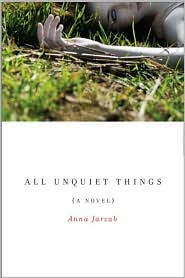 Neily is the guy who found his ex-girlfriend Carly shot dead on an abandoned bridge over a year ago. Audrey is Carly's cousin and it was her father that was accused of the crime and sent to jail. But a year later, Audrey convinces Neily that the cops got the wrong man. Soon, there is a story of drugs, kidnapping, rape, and disappearances to add to the mix. Very quickly, both young people realize that they are getting in over their heads as the plot thickens.

This is extremely well-paced and Jarzab does a nice job of unraveling the story -- through a combination of narrative shift and flashbacks -- in such a way to keep things very interesting. Even the ending, which is predictable, keeps you beholden to the page. If story is what you're after, this is a good one.

The writing, however, is not nearly as good. First of all, despite being told by two separate narrators, there is no effective difference between the voices of Neily and Audrey. They both just sound old (what teenager would ever describe a room as being like "an English garden" or write such convoluted prose as "free to pace the winding corridors of our minds in search of answers to questions we had just started to learn how to ask"). Jarzab also has a rather odd notion of the generation she is writing about. At one point, she notes that the kids remember 9/11 like their parents remember where they were when JFK was shot. Excuse me? Whose parents?! (Let's do the math -- most HS seniors today were about nine years old during 9/11 which is not really an age where that sort of thing sinks in and their parents were probably 1 or 2 years old when Kennedy was shot!) Yes, it's small stuff, but it piles up after a while and it bugged me. I wanted to like the book because of its great story, but the lack of attention to detail distracted me.
Posted by Paul at 8:55 PM

Totally agree with your response to the writing level of this book-- I actually haven't been able to get through it because of it.