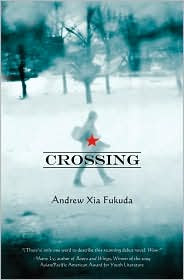 Xing Xu is one of only two Chinese kids at his high school in Upstate New York. Unlike the other one (the bright and popular Naomi Lee), he's never been able to fit in. Instead, he tries to stay unobserved in the shadows. But when boys in his class start to disappear, Xing realizes that he -- on the sheer basis of being different -- is going to be eyed as a suspect. Ironically, as a careful observer of his peers, he proves to be the most adept at identifying the real culprit.

A chilling and scary book about psychopathic killing, prejudice, and paranoia -- in sum, not really my thing. For me, a simpler story about prejudice and how it makes its victims self-doubting would have been a compelling story, but Fukuda wanted to amp up the story with the murders (it does tend to expand the appeal of the book). While I didn't care for that particular decision, I can still acknowledge the strength of the book. It works on many levels. If you want a suspense/mystery novel, this will work for you.

The key to the book's success lies, as always in a decent book, with a great protagonist. Xing's character is particularly vibrant and interesting. His observations about the town's prejudice are damning and spot on. But Xing's real appeal lies in his ability to be an honest judge and he is equally critical of himself, which makes the misunderstandings in this story all the more poignant (and makes the ending just that much more haunting).
Posted by Paul at 7:39 PM

Excellent review! I'd write more but kitten is lying on my right arm.