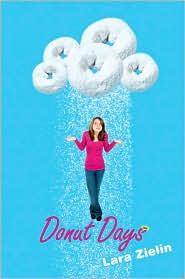 The Crispy Dream donut chain is opening a new branch in town, and Emma is determined to write the story of a lifetime to win a college scholarship from the local newspaper. She needs the money because her parents have made it clear that they won't pay for school if she pursues a secular education (they would prefer it if she went to a Christian school). But then, she's always been the black sheep of the family. While her parents share ministerial duties at an Evangelical church and her little sister is the poster child of pink, innocent devotion, the binding on Emma's Bible cracks loudly from lack of use during prayers and she's never yet spoken in tongues.

But writing this article opens up an entire new perspective for Emma, as she meets obsessed donut fans, college students getting to know each other, and even a group of born again motorcycle riders (whose issues and challenges, Emma discovers, mirror her own).

Meanwhile, her parents are facing their own problem: a wealthy congregant who has launched a campaign to remove Emma's mother from the ministry (under the old chestnut that women should not serve in the role). Emma is suspicious of the man's motives but her parents refuse to discuss the subject with her. And for her protestations, Emma alienates her friends as well.

While the donut shop grand opening and the political struggle at Emma's parents' church may seem largely unrelated, Zielin makes the stories overlap in a way that does not seem forced. And the overall message -- mostly, about standing up for what you believe in -- is sufficiently unifying to both story lines.

I was mildly twitched by the obvious cover of Krispy Kremes (I really didn't get why Zielin couldn't have stuck with the real brand name) and on guard with my religion-fairness radar. The latter more so because Zielin conflates faith with stubbornness and hypocrisy. It isn't so much that I like Evangelicals all that much (in case someone misconstrues my criticism) but rather that I consider it a lazy target. It's far too easy to create a religious nut case with a secret sinister agenda. And it's far too easy to assume that people who have faith are incapable of having an open-minded discussion. Now, it is true that at the end of the book some of the characters come clean, but it's a little too little and too late for me. It also struck me as a bit cheap that the main conflict with the parents is resolved so easily (oh, you mean that all those times you said that you didn't like being cut out, that you were telling the truth, Emma? Oh, my, I'm so sorry we didn't do what you asked us to do!). I thus found the bad guys to either be too simple or too weak.
Posted by Paul at 5:55 PM