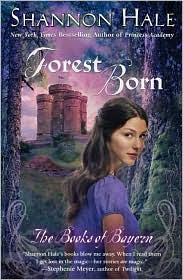 This fourth outing in Hale's highly-successful Books of Bayern series introduces Razo's little sister Rin, who has a very different -- and more subtle -- talent than the previous heroines of the series. When she concentrates, she can hear trees (but not speak to them). She also seems to have a second power to read the truth and influence people (as well as an unspeakable fear of using the power).

While an obedient and helpful daughter to her large family, she feels lost in her home in the woods. Fearful of her talents, uncomfortable with her roles at home, she feels drawn to take a trip to the capital of Bayern to visit her brother. She arrives in a time of turmoil as mysterious events are taking place on the northern border with the Kingdom of Kel. Rin gets drawn into these events and comes face to face with the true nature of her powers (and why she fears them so much).

As fair warning, the series has now become so developed that you really need to start at the beginning in order to get its full flavor. Yes, there is sufficient backstory in this installment to catch you up with the important details, but to truly appreciate the characters it is worth the time to read each of their stories in the previous three books.

That said, I found this latest novel to be one of the most emotionally and psychologically complicated in the series. A true YA master, Hale recognizes that the key to writing truly outstanding literature for teens is both telling a good story and also creating characters whose struggles resonate with them. For teens who fear their own abilities (or even just taking the risk of exercising their talents), Rin's search for balance between action and observation is welcoming balm. This is fantasy for the thinking teen.
Posted by Paul at 2:57 PM