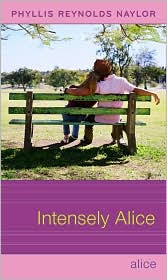 Following the Alice series has become a major commitment and for those unfamiliar with the books, it would take a bit long to get you caught up. What began as an interesting series about a girl growing up in suburban Maryland has become something of a teen lit behemoth. It's not so hard to see the appeal of the books as Naylor details the life of Alice so thoroughly that we know basically every personal embarrassing detail of herself and her friends. The Alice series reminds me of the 7 Up television series -- it shows up at regular intervals to remind us of how we have grown. I've been reading the series for nine years now, and I imagine that there are plenty of people who have read them longer than that. They are not great literature and Alice's normality is coupled by a degree of shelteredness that only a fellow suburbanite could truly equate with reality, but this is literary comfort food and it serves a purpose (more on that below).

This latest installment takes us through the summer between Alice's Junior and Senior years of High School. Her long-term boyfriend Patrick has gone off to Chicago for the summer and Alice is going out to visit him. The big decision (should she have sex with him?) hangs over her for the first half of the book. It's a big decision and one that fans have been waiting for her to decide for at least the past six-seven books. And then there's also her cousin's wedding, a stint working at a homeless shelter, and a bunch of reflections about getting older. Near the end of the book there's a big shocking plot twist to give it all some gravitas.

The problem with Naylor (and I've said it before in nearly all of my reviews of her books) is that she really doesn't know how to write for older teens. For as much explicit material is included in this book, it is surprising just how chaste these books are. That may strike some adults as crazy talk (this novel, for example, includes a pretty explicit sex scene -- on pp 113-14 if you want to jump ahead to the "good stuff" -- and some major sexual themes lifted right out of Judy Blume's Forever), but Naylor is always cutting an agenda. Whether it's how to deal with unwanted guests, sexual harassment, or even being assertive in bed, Naylor always makes sure that Alice does the right thing. All that makes Alice look like a goody goody and just a bit to perfect to be true. In fact, I would argue that Alice isn't supposed to be real (protestations of her fans to the contrary) -- she's a representation of what Naylor would like girls to be like. In a way, it's like a 21st century equivalent of a good for young ladies. I personally find that a bit creepy, but I suspect that people enjoy the fantasy too much to worry about it. And for the younger teen readers, there probably is a comfort in having a role model who squeaks as well as Alice does.
Posted by Paul at 9:25 PM