Into the Wild Nerd Yonder, by Julie Halpern 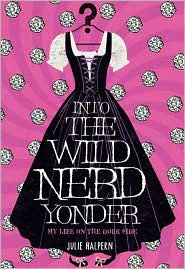 Jessie's talent in math (and school in general) along with her unusual hobby of sewing her own skirts out of goofy fabrics would probably get her branded with the "geek" tag if it weren't for her uber-cool older brother, his punk rock band, and his orange mohawk. Jessie's status is also secured by her two BFFs (Char and Bizza) who, while not the nicest of people, at least cut out a place for themselves (and Jessie by association) through their own outlandish tastes.

But as Sophomore year starts, Jessie is beginning to wonder what she really gets out of the deal. Her BFFs don't really support her or even care what she does. All they want is to flirt with the members of her brother's band. And when Bizza makes the moves on Jessie's long-term crush (the bassist of the band), Jessie has to confront the fact that she is being used.

Simultaneous with the realization that her friends really aren't her friends anymore is Jessie's acquaintance with a girl in study hall who plays Dungeons and Dragons and wants to recruit Jessie to sew her and her friends some garb for a live-action role-playing weekend in Wisconsin. To learn more, she surreptitiously joins them for a gaming night and discovers that it is a lot of fun! Now, Jessie is torn between being a borderline geek (with cool friends that lend her some status) and throwing it all away and plunging into the wild nerd frontier of D&D and a group of kids who are actually nice to her for a change.

You can almost certainly guess where the story is going, but with Halpern the fun is really in the trip itself. At the core of that fun are the characters. Jessie is a great character with the spunkiness and attitude of some of the best YA heroines (think Ruby Oliver or Cyd Charisse). She mixes vulnerability with strength (crushing seriously on her guys yet willing to take the initiative and kiss them instead of waiting for them to pick up the nerve) in a way that is really appealing. Her older brother is sufficiently annoying to be believable yet sympathetic and wise enough to be helpful and useful. The parents are unobtrusive but not clueless. Even the bitchy ex-BFFs are decent foils without being over the top.

The story moves at a decent pace, yet develops in a believable fashion. That is certainly a big challenge as Halpern needs to get Jessie from being credibly committed to her friends and her crush, yet, by the end, she has successfully morphed into a person who can reject that life and choose a new one. This hardly happens overnight (or in a few pages) and Halpern keeps a tight watch over the dramatic arc to deliver a story that you can accept and a metamorphosis that you can root for. Good fun!
Posted by Paul at 5:36 PM