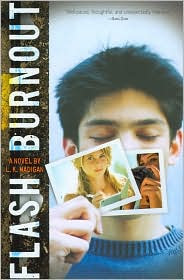 The book's title refers to what happens when you misuse a flash, causing a photograph to be overexposed and washed out. It's the perfect metaphor for what happens to 15 year-old Blake's life when he gets sucked in to helping a friend (Marissa) cope with her troubled home life. There's also a difficult juggling act with his girlfriend (Shannon) and plenty of trouble with his peers and various adults (his parents, his girlfriend's parents, and his teachers).

It's pretty much required that any book about teen-aged boys focus on their raging hormones. I'd never be a fool enough to deny that 15 year-old boys are obsessed, but it doesn't make for interesting reading. So, kudos to Madigan for understanding that lust is not an end in itself, but rather a low-key roar in the background of everything else. Blake and his buddies may spend a lot of time talking about sex and posturing for each other, but he comes off as sympathetic and interesting at the same time. Sure, he'd like to get his girlfriend into the sack, but he's got plenty of other things going on in his head.

Just about every character in this book has a bit of depth in them: Blake's parents are embarrassingly geeky while still being clued-in and responsible parents, Blake's older brother is a wonderful foil, and both the boys and the girls act in a realistic and believable fashion. The only part that didn't work for me was the DJ girl (Cappie) who seems more like she is supposed to be symbolic of something than that she really exists in the story. And Shannon's parents are probably intended more for comedic value than anything else.

The story is funny, moves swiftly, and keeps you interested. It's also the sort of "boy book" that is targeted as much at female readers as male ones.
Posted by Paul at 4:46 PM