The Indigo Notebook, by Laura Resau 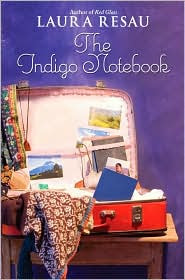 Zeeta and her mother are wanderers. Just when Zeeta gets settled in one place, her Mom decides to pull up stakes and take them someplace else. This time, they've come to South America.
In the town of Otavalo, Zeeta meets an American boy named Wendell who is looking for his birth parents. Zeeta (whose Spanish is much better than Wendell's) helps him in his search, which ends up in a remote village with a series of dark secrets. Meanwhile, back at home, Zeeta's mother Layla has found a new boyfriend who has finally convinced her to settle down. But after wishing for this for so long, Zeeta gets cold feet when the reality of returning to a "normal" life appears to be becoming a reality.
Like Resau's other books, this one is filled with loads of beautiful cultural details. However, I found the story itself more disjointed and muddy than her previous books. There are a lot of characters and having the narrative split in two (between the Wendell story and the Layla story) didn't help. Subplots (like the romance between Wendell and Zeeta, and Faustino's relationship with his family) remain sketchy and underdeveloped. It's simply a case of trying to do too much.
And as for the meaning of that blue notebook? Forget it! That never really gets any decent explanation.
Posted by Paul at 8:28 PM