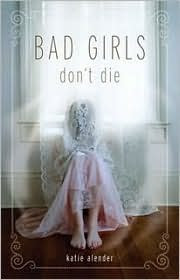 Alexis is a bit of a high school misfit with a reputation for causing trouble with her peers. Alexis's little sister Kasey is no better. She has hardly any friends and is attached to her dolls, risking ridicule at the age of 13 for doing so. With all of this outsider vibe going on, Alexis is surprised when a popular boy named Carter starts to show an interest in her. Before she has much time to worry about that change of fortune, Alexis begins to notice strange things going on around the house (doors closing on their own, strange noises, etc.) and odd behavior from her sister that seems to suggest that Kasey is either developing multiple personalities or is becoming possessed. These disturbances take on an increasingly sinister character.

This is a strange novel with a split personality of its own. One angle is the story of an outcast learning to accept that she too could be popular. On the other side, it is a ghost story (part mystery and part horror) -- consider it like Sixteen Candles meets Poltergeist. And I'm not convinced that it really works. The ghost story is the strongest part, as the romance with Carter and the friendship with cheerleader Megan end up becoming annoying distractions far removed in tone from the rest (and are a less developed part of the story).
Posted by Paul at 3:16 PM