Before I Fall, by Lauren Oliver 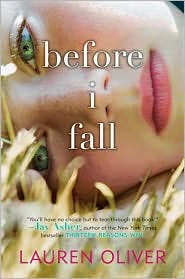 Samantha is part of a totally It clique -- four girls who rule the school and don't mind putting everyone else in their place. But after a party in their senior year, the girls are in an accident and Sam dies. When she wakes up in the morning, she's convinced that it was all a horrible nightmare, until she discovers that she's woken up on the previous day and now must live the last day of her life over again. It won't really surprise anyone that the point of this exercise is to learn to fix the wrongs of her life before she'll be free of the cycle. What is a surprise is how it all will work out -- with a conclusion that will keep you totally in suspense until the very end.

Now, my initial thought was: who on earth needs to take Groundhog Day (a totally sweet movie) and make a YA version of it? Especially since Wendy Mass wrote a similar book called Eleven Birthdays which had essentially the same premise. And why make the story an amazingly long 460-odd pages? But once you read this book, you realize that Oliver really has a much more ambitious agenda. Certainly, the story starts off as one YA-cliche after another (popular girls, unpopular girls, self-absorbed boys, parties, beer, feminine hygiene references, etc. etc.) but once that groundwork is laid out, the story takes some significant jumps forward.

The key, as always, is great characters. Sam is the epitome of great YA heroines. Getting to live through the same day again and again, we really get to see her grow as different choices in each day allow other events to happen. She's multifaceted and her growth has a great and natural progression to it. Supporting characters like Lindsay and Juliet are also quite moving. Neither is quite the villian or victim that would be shown in a typical novel. Instead, their particular "flaws" blur the edges of their characters. The result is depth everywhere you look.

For a first novel, this is truly a stunning work and I look forward to seeing more from Lauren Oliver!
Posted by Paul at 10:32 PM