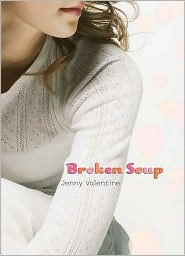 After her older brother Jack died, Rowan had to step up to keep her family together. Her mother had retreated into herself in grief, her father had left them, and her little sister Stroma was too little to manage without someone to help. But it's been hard going.

Then one day a stranger (an American boy named Harper) hands her an old photographic negative in a shop. She's never seen it before but he claims it fell out of her bag. When she discovers that the negative is actually a picture of Jack, the mystery deepens. But that mystery is only the beginning of a series of revelations that help Rowan come to terms with Jack's legacy.

While this sounds like a lovely book and it's gotten several rave reviews on other sites, I couldn't get past how deadly dull the story was to me. The characters were not interesting and their struggles were meaningless to me. It seemed like every time Valentine ran out of things to write, she'd just introduce a new crisis. The book lacked direction.
Posted by Paul at 8:27 PM