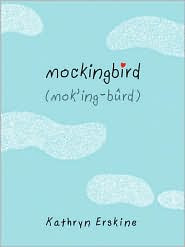 Caitlyn struggles to get through life as it is. Suffering from Asperger's Syndrome, the only person around her who ever really Got It was her older brother Devon. But after Devon is killed in a school shooting, she tries to both cope with her grief and to articulate her feelings to others. Her father, while unimpaired, is in his own way unable to deal with his emotions either. In these difficult circumstances, Caitlyn proves to be wonderfully insightful, reaching the right conclusion through significant struggle and solving the problem in her own unique way.

There have been several other children's books which attempted to explain Asperger's to readers, but this one strikes me as the most successful one to date. Without sacrificing entertainment value, strong character, or realism, Erskine has Caitlyn shows us clearly how she thinks and gets through her communications with others. It can be a difficult ride at first to follow the narrative but by the end of this poignant story of loss and perseverance, you really find that you are putting yourself completely in her mindset. In her words, by the end of the story, I finally Got It.

Even beyond the tremendous achievement of Erskine's portrayal of Caitlyn, her ability to develop even her "normal" characters is notable. The father is nicely portrayed as difficult and troubled in his own way. Caitlyn's friendship with Michael is developed in both a beautiful and realistic fashion.

I suppose that one could fault the book for its sentimentality (I'm a sucker for books that make me fight back the tears), but the story never became syrupy. Rather, I found my spirit both moved and uplifted. This is, by far, the best book I've read in 2010 so far and it is hardly an outlier. I had not noticed before I started reading this book that Erskine is also the author of Quaking (a near miss book I reviewed some years ago) and all I can say is that she keeps getting better and better. You will want to make a point of catching some time to read this one!
Posted by Paul at 11:33 AM