The Summer of Skinny Dipping, by Amanda Howells 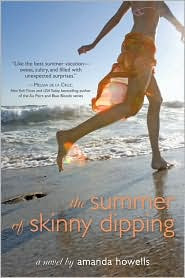 Rebounding from getting dumped by her boyfriend, 16 year-old Mia is looking forward to spending the summer in the Hamptons with her aunt, uncle, and two cousins (the youngest of whom - Corine - Mia has always been close with in the past). But this summer, things have changed. Corine has grown more worldly and the two girls find that they have little in common. In Corine's mind, Mia hasn't grown up, but Corine's drugs and alcohol lifestyle repulses Mia.

When Corine dumps Mia at a party, it provides an opportunity for Mia to meet the boy next door (Simon) and the two of them hit it off. Meeting late at night on the beach, Mia finds herself being drawn into a romance that she never expected and didn't even think she wanted. Meanwhile, family relationships are being sorely tested as just about everyone is confronting each other. By the end of the summer, Mia realizes that many of her impressions of herself and of her family need to be corrected.

On its face, this novel follows a pretty familiar trajectory and thus provides nice summer comfort reading. In that respect, it reminded me for the most part of the Au Pairs series. However, this novel runs deeper than that sort of mindless fluff. Both the romance and the relationships between the other characters are fairly thickly drawn. There's plenty of character flaw lying around and both adults and children behave in a fairly realistic fashion.

The real difference with this story is the ending and I'm less thrilled about that. Without giving away the specifics, the book takes a sudden and serious shift into tragedy in the final chapters. I'm never a fan of last minute twists, but it does provide a heavier sense of pathos to the story and provides some good emotional weight. The danger is that it also drowns the other plot lines. When tragedy strikes, the seemingly important spats and conflicts seem insignificant. And the rushed ending sweeps most of them under the carpet.
Posted by Paul at 3:29 PM