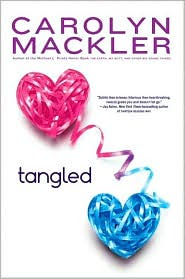 It starts in the Caribbean as four teens (Jena, Skye, Dakota, and Owen) meet at a resort. While Dakota and Owen are brothers, the four of them share almost nothing in common (except perhaps being all from New York). In the subsequent months, their stories overlap in unexpected ways. To drive home this overlap, the novel switches storytellers at key junctures giving us a fresh perspective on the events.

At its heart, this is a fairly pedestrian teen romance. While it has some of the Mackler-trademarked humor (more on that below), it does not especially break new ground. The big shtick in this one is the shifting viewpoints, which is done in entire sections of the book rather than in alternating chapters. Thus, a full quarter of the book is told by Jena and then the second quarter is passed to Dakota, and so on. Key revelations are doled out sparingly (and frequently much later in the book) to conserve the ah-ha! moments.

Mackler's made something of a name for herself with spunky and funny heroines. In comparison to her earlier books, this one is not terribly funny. That doesn't mean that she's trying her hand at drama, but rather more a mark of the low energy of the story. Part of the problem (and its true with any book that shifts POVs) is that, just as you are starting to get interested in one of the narrators, it shifts to the next and the story you were following (if character is what you are into) gets lost. It's more true in this case since once the story switches to a new character, the others get sidelined.
Posted by Paul at 7:49 PM