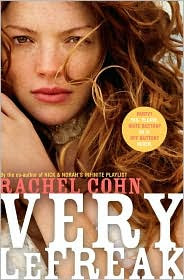 Essentially two separate stories loosely tied together, this is a novel about a freshman at Columbia named Very (short for Veronica) LeFreak who is a combination of a technophile and a party animal. She spends the first half of the book hosting parties, mooching off her peers, losing herself in emails, browsing, and texting her friends. In the process she fails her classes, alienates her friends, and generally loses touch with reality. In the second half of the book, she goes in to "rehab" trying to recover from her tech obsessions and come to grips with her real life (which she has been avoiding with all of the tech gadgets).

The first half of the book, which generally worked for me, is sort of an updated retelling of Party Girl. The Middle Eastern falafel seller is replaced by a mysterious South Asian online companion, but the obsession with hosting good parties and the conflct between wanting to do something real with her life and escaping into hedonism is pretty familiar territory. There's enough of a hint in those early chapters about why Very has trouble with reality and also about her own acknowledgement that the current situation cannot last. It has a good sense of tension and Very is an interesting character to watch.

However, the second part really falls apart in my opinion. Even the concept (a summer camp in Vermont where addicts recover from their tech obsessions) just seemed downright silly and impractical. Yes, I understand that obsessions come in all flavors, but the program laid out is goofy. Worse, the storytelling declines significantly. The timeline turns jumpy, plot points are lost and recapped later, romantic lines that were barely hinted at in the first half are sloppily developed. Worst of all is the two dimensional counselor Keisha who is an amalgam of every literary stereotype psychologist and less. Frankly, I just tried to plow through part two as fast as I could. I'd recommend that you skip it altogether.

Rachel Cohn the author has grown to disappoint me. Her first books (Gingerbread and - to a lesser extent - Shrimp) were outstanding original works with a great sense of humor. I loved them. But since then, her writer has weakened noticeably. Very could have been an interesting character, but it seems as if once she hits rehab, Cohn doesn't know what to do with her.
Posted by Paul at 8:55 AM