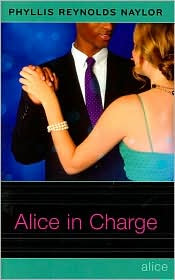 In this twenty-fifth installment of the Alice series (Wow! It's hard to believe the sheer stamina of this project!), Alice is finally entering her senior year. She's struggling with her intense workload and applying to colleges. She's missing Patrick (who's now at Chicago in his freshman year). There's a new student from the Sudan for her to help acclimate, a developmentally-challenged girl named Amy for her to support, and a club of neo-Nazis to shake things up.

One of the interesting things about Alice and her development is observing how her priorities have changed. While friends were very important in the earlier books, so much of her life now is spent doing things. Relationships have become a much lower priority for Alice (or at least for Naylor). The chief casualty is the relationship with Patrick (which is a poorly maintained plot thread now) but there is also surprisingly little in this book on her relationship with her best friends like Pamela.

Beyond that, there is a certain tiredness with the story these days, as if we are just going through the motions of a contractual obligation. Naylor has promised us that she'll continue to follow Alice's life until at least she graduates and that puts us one or two books away from the end. That achievement is certainly worthy of notice as no other YA writer has documented so minutely every developmental moment in the life of their heroine. However, Naylor's abandonment of tracing the nature of Alice's friendships in these later books (in favor of highlighting as many actions as possible) is a sign that things are truly wrapping up.
Posted by Paul at 8:21 AM