And Then Everything Unraveled, by Jennifer Sturman 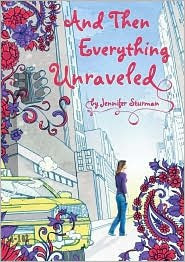 When Delia's mother disappears in Antarctica and is presumed dead, Delia is sent to live with her eccentric aunt Charley in New York City. But rather than grieve about her loss, Delia attempts to figure out what happened to her mother. It quickly becomes apparent that things don't add up and Delia grows convinced that her mother is still alive and being kept against her will. In the midst of her sleuthing, there's a bit of romance as well with a boy from school who is also the son of a man apparently tied to Delia's mother's disappearance.

It's a nice fast-paced read with a bevy of memorable characters. Not very realistic, but the humor keeps things moving along. I'm also not a big fan of the ending (or the lack thereof) but it will lead well to the inevitable sequel (which hit store shelves on July 1st). I'll also note my usual protest against gratuitous references to 80s teen movies.
Posted by Paul at 1:04 PM