The Carbon Diaries 2017, by Saci Lloyd 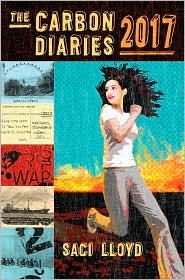 In this sequel, two years have passed since the flooding of London from global warming. Laura's parents have moved to the country but Laura has stayed in London, occasionally attending art school classes and trying to get her band Dirty Angels off the ground. The times are definitely unusual: climate change has destroyed most people's livelihoods, the government has turned authoritarian, drought in Africa has triggered a mass exodus northwards and set up massive anti-immigrant sensibilities. When Laura isn't jamming, she and her friends are protesting the government and just trying to stay alive.

The first book was an uneasy balance between science-fiction and YA, but the second installment is even more untenable. When one considers the true horror of the political situation described in the book, it's really hard to figure out why Laura puts so much effort into her band. She may simply be obsessed, but for the reader it is hard to know where to throw one's focus: massacres of dozens of people or canceled gig? The writing is wooden and the characters are largely forgettable. Since I didn't find the people worth paying attention to, I turned to the unfolding events, but everything is told so flippantly (albeit a bit like a teen would process things so I'll give it points for realism) it is really hard to figure things out and the violence just seems arbitrary.
Posted by Paul at 12:37 PM